I arrived in Semporna in the middle of October, 2011, looking forward to a day of diving at Sipadan island, which is famous in diving circles as being one of the most stunning dive spots in Asia. Sipadan is under the control of the Wildlife Department and the government only issues 120 passes per day (for all visitors, diving or not), so it’s necessary to book in advance, ideally a month, especially during school holiday periods. The island is situated in the Semporna Archipelago, at the eastern edge of Sabah in Malaysian Borneo, and there is excellent diving to be done throughout the whole area. Apart from Sipadan, where all the fish look as if they’ve been on steroids, the focus is on macro diving, i.e. searching closely for tiny, unusual creatures, and it’s addictive stuff. I saw new wonders every time I entered the water. 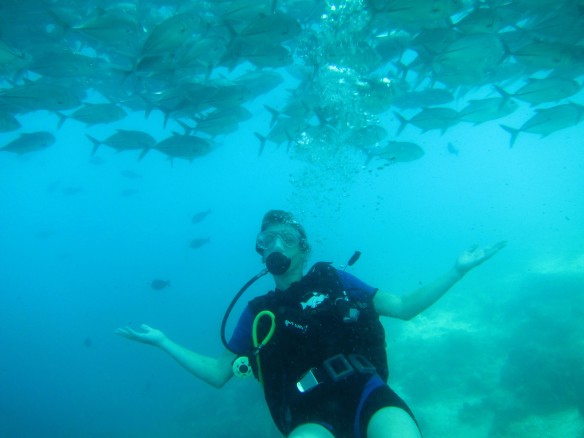 Me under a shoal of jackfish, Sipadan. Photo by Jason Browning

Semporna is the transport hub to the islands – it’s where your bus or taxi will drop you, and you’ll transfer to a boat – and there’s not much to do there, although it’s slightly better than the Lonely Planet makes out. I met a large number of foreigners who have made Semporna their temporary home, and they all seemed to like it. The fact that they’re out diving most days probably helps.

All the diving operators are based around ‘Semporna Seafront,’ a short walk from where the buses arrive in the centre of town, and most of the accommodation is here too. There’s a ‘Giant’ supermarket, a Guardian chemist, some half decent Indian, Chinese and Malay restaurants and the ‘Mabul Cafe,’ which is a breezy spot on the second floor, with free wi-fi. The nearest ATM is next door to the Giant.

I stayed in the Backpackers run by Scuba Junkie, because I was diving with them and they offer a RM20 (about UK£4) per night deal, including breakfast, for divers (RM30 for non-divers). It’s a scrappy place, with bunk beds crammed into musty rooms, but undeniably cheap, with lovely staff and unreliable wifi. The associated restaurant next door is run by a Kiwi chef and offers tasty Western food, a bar, and a free pool table. If you’re stuck here for a day or so without diving, take a walk around the nearby fish and produce market. The people are curious but friendly, and you’ll see a huge variety of dead marine life, including sting rays, barracuda, octopus and shark fins.

I also spent several nights on Mabul island, which is much more conducive to relaxation, being surrounded by beaches and sparkling sea, although there’s been no control on development and I was surprised by how crowded it is. It’s not a large speckle in the ocean and there are now up 14 dive companies based here. Besides which, Malaysians, Indonesians and illegal immigrants from the nearby Philippines have been arriving here for over 30 years, and their house-on-stilt villages are crammed into the spaces between the resorts. At the shallower side of the island the houses are built far out over the water, connected by rickety raised walkways. Sewage falls directly into the sea and the whole place is highly vulnerable to storms or tsunamis.

One company, Seaventures, is based on an old oil rig that was towed to Mabul to make an artificial reef, and I spoke to several tourists who thought this a terrible eyesore. Personally, I found the brightly coloured rig much less ugly than Sipadan Water Village and Mabul Water Bungalow, two resorts built on stilts around board-walks jutting from the beach; and at least the artificial reef is teeming with aquatic life.

Scuba Junkie jetty, looking out to the Seaventures rig

Walking down the jetty to the Scuba Junkie Beach Resort, one is immediately struck by the contrast between the empty, resort beach on one side, and the rubbish strewn shanty town on the other. It’s not a hostile stand-off, however. Many of the locals are employed by the resorts, have opened their own budget accommodation, or set up a rickety stall, and you’ll be greeted with smiles as you walk around the island. Furthermore, the situation is more complicated than it looks due to the mixture of residents. Some parts of the village are much more established and here the houses are solidly built, with gardens full of flowers and immaculately swept surroundings. Volleyball courts have been marked out on the bare earth and young men gather here daily to play games, smoke, chat and listen to music on their phones.

Scuba Junkie seems more aware of the problems facing the area than some of the other dive companies, and are committing thousands of dollars per year to environmental and community projects. For a start, they employ two full time divers to monitor the ocean around Mabul and nearby islands, and provide information to a global database called reef check, http://www.reefcheck.org, on details such as the salinity of the water, the growth of sea grass, the state of the coral and the abundance of marine species. Their recently expanded resort uses solar energy, and they have a ‘green’ sewage system which doesn’t affect the salinity of the ocean.

Mabul Marine Week is a collaborative venture involving all the dive operators on the island, focussing on beach and reef cleans, and community projects. In 2011 Scuba Junkie took over as Chairman of the Marine Week Committee and they have ramped up the level of involvement and commitment. They are expanding awareness of the week by involving organisations such as PADI, Project Aware and the Sabah Wildlife Department. See http://www.projectaware.org/action/mabul-marine-week-2011. During the 2011 week they opened the first turtle hatchery on the island, to help protect the endangered Green and Hawksbill turtles, which are native to the area. Local people are offered a finders fee when they tell the turtle hatchery about a turtle nest on the island, and the eggs are then relocated to the Hatchery by a trained marine biologist. 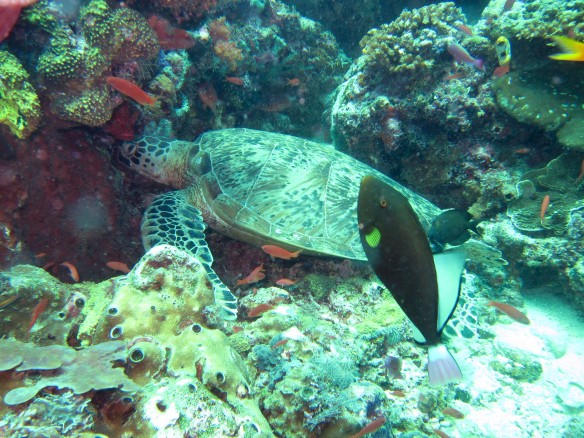 Rohan Perkins has been the Scuba Junkie Environmental Officer for the past three years. He is highly committed to his job and is particularly passionate about banning the insidious practice of shark finning, which has contributed to a decline in some shark species by more than 80% over the last 50 years. As part of the S.E.A.S. project – Shark Education Awareness Survival – he raises awareness of the issues with a moving presentation on shark conservation, and the project has secured thousands of signatures for shark petitions. I asked him what he thought were the biggest problems facing the area.

‘I’d say destructive fishing practices are the biggest issue, and waste management. Many of the people in Mabul live in extreme poverty and the problems have been increasing over the past 30 years. People rely on fishing to feed their families, but it has to be made sustainable. The diving industry can have a negative impact on the environment but if managed correctly it can be very positive. Eco-tourism can make more money than fishing or shark finning, but we have an active responsibility to put the tourist money back into the community, such as by training and employing people. Volunteers have started a School of Hope for the stateless children and are raising money through the sale of friendship bracelets and postcards made by the children.’

‘However, uniting the dive organisations is difficult as everyone has their own agenda. Currently, the island is privately owned, but the idea in the future is to get the government to tax the dive centres if they don’t clear up their rubbish. They need to take more responsibility.’ 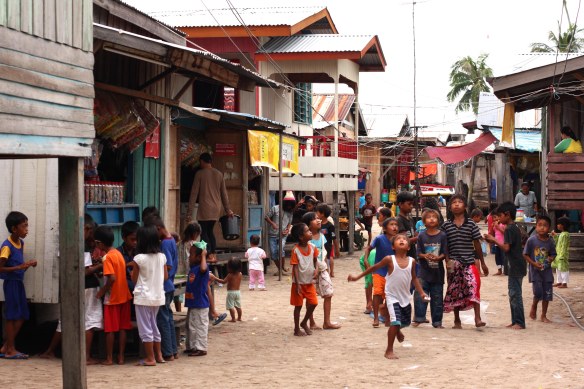 Some of the many children living on Mabul island

Scuba Junkie has provided the local community with hundreds of rubbish bins, but Rohan says
getting people to use them is a challenge. They have a tendency to remove the bins and use them for storage purposes. Nevertheless, there is now a rubbish collection in the village four times a week and this has been at least a partial success.

‘We’re now at the preventative stage, but educating people takes a long time, and there needs to be a lot more re-cyling. The next five years is very important for waste management. If the whole Semporna area was classified as a marine park then people would have to pay a fee to get in, and the money could go towards conservation, retraining people, and dealing with the rubbish.’

‘Encouragingly, Datuk Masidi Manjun, the Tourism, Culture and Environment Minister for Sabah, has promised that shark finning will be banned in Sabah by the end of this year (2011). He’s putting his job on the line, because the fishing lobby in Kota Kinabalu (capital of Sabah) is very strong; but the announcement was widely reported in the Malaysian press, so it’ll be difficult for him to go back on his word.1 Not only that, but there could be a shark sanctuary around the Semporna islands within the next 12 months, and of course the sanctuary will protect everything within it: mantas, turtles, devil rays. Many people have been working a long, long time for this.’

I loved the dives I made, and it helped that the guides were so enthusiastic about the creatures we found, and took time to help identify them later. The visibility at Sipadan was only about 10m, which was a shame, as I expect this would have taken it to another level, but it still ticked most of the ‘amazing’ boxes: turtles, reef sharks, barracuda, incredible 2000m drop offs. A few days later I went diving around Siamil island and almost enjoyed this as much, having been converted to the joys of macro. This island is inhabited only by the military (there is a strong military presence all along the North Borneo coast) so there is very little rubbish and the water is pristine. I saw a coconut octopus here, with shells attached to each of its tentacles as if it was playing in an underwater band, and a single, delicate, thorny seahorse.

Setting off to go diving at Siamil. Kitty can’t come too!

Back in Semporna, I braved the infamous night dive in Semporna harbour, loved by local dive aficionados because of the variety of bizarre creatures you come across. It was my first night dive and it was scary enough sinking into the black water, but made much worse knowing it was full of hazards such as old nets, pieces of rusty metal, sea urchins and piles of rubbish. I prefer the aesthetic pleasures of clean water and sunlight, but it was certainly interesting, like a visit to a dark, alien planet inhabited by fantastical creations with googly eyes, or bodies that light up and change colour. There were a lot of seahorses living here, but even they seemed mutated by their surroundings into something large and slightly grotesque, with long, grasping tails.

At least it’s encouraging to know that underwater life can still thrive in relatively polluted surroundings, but ideally, the area will eventually be cleaned up. It’s difficult to convince people that the ocean is not a giant rubbish dump, when it has been used as one for centuries, but, as Rohan says, the tourism industry must lead the way. Generally, the local people are living a hand to mouth existence and their first priority is survival. If Semporna is to keep its incredible diversity of marine life then everyone involved in the area, including the short stay visitors, must work together.

1 In November 2012 Datuk Masidi Manjun was still ‘strongly advocating for a total ban on shark fishing and shark finning,’ (http://www.divedownbelow.com/news-and-events/tourism-ministry-supports-downbelows-finathon/) The law is now due to come into effect in 2013, but I can’t help feeling pessimistic about how strongly it will be implemented, if indeed it is actually passed.

1 thought on “Diving in the Semporna Archipelago”