‘Trinco’, as it’s known by most Sri Lankans, has always had a very diverse population, made up predominantly of Hindu Tamils, Muslim Arabs and Buddhist Sinhalese. During the 26 year civil war there was severe fighting in the whole Trincomalee area, resulting in the deaths of thousands of people and the wounding and terrorizing of thousands more. The government finally took control in 2006, but the LTTE (Tamil Tigers) continued to make raids. 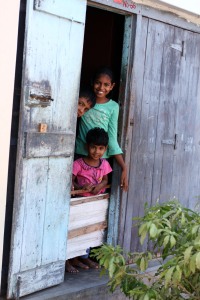 The war wasn’t declared over until the last LTTE rebels were defeated by the Sri Lankan Army in May 2009, fighting over a last, devastated section of coast in the north-east. Up until this time Trinco was kept tightly under military control. There were soldiers on every street corner, shops were shuttered and people didn’t venture out of doors unless they had to. I arrived two years later, in June 2011, and (as in Batticaloa), I wasn’t sure how it would be here, but I was in for a pleasant surprise. The government has realised that having soldiers visibly occupying the town only stirs up discontent. Almost all the checkpoints have been disbanded, there are no more military roadblocks on the way in and the reams of barbed wire are being gradually cleared away. It is now safe to say that Trincomalee is open for business! 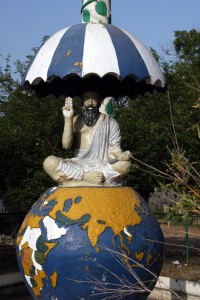 I spent my first day walking around the streets, admiring everything and smiling at everyone. The Kandasamy Kovil was in the process of being renovated, but they let me wander around it and take some pictures. Old men sitting on the wall outside welcomed me enthusiastically. All the precious deities were gathered together under an awning while the rest of the temple was hurriedly repainted. 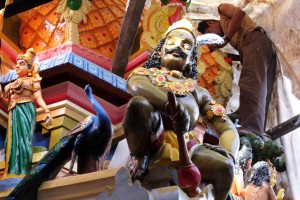 I continued down pretty back lanes, past giggling children and curious women, to St Mary’s Cathedral. This attractive blue catholic church, built in 1852 and surrounded by flower-bushes, offers a cool respite from the sun. Dutch Bay is a remarkably clear stretch of water and bright white sand that made me long to go swimming.

Near the bay I spotted a tsunami evacuation sign, one of many put up in coastal areas. The sign has a big arrow painted on it, pointing away from the sea, together with a diagrammatic picture of a small person running away from a big wave. They seem a little bit redundant, since surely anyone would run away from the sea (!), but I suppose they point down roads that don’t lead to dead ends.

I’d only been on the shore for a moment when a young man hailed me loudly and ran over, demanding that I take his photo in quite an aggressive way. I refused but he wouldn’t leave me alone until I determinedly walked away down the beach. After a while he followed me, muttering in a low voice, and I continued to be angry and defensive because he was so belligerent. However, when it became obvious that ignoring him wasn’t working, I decided to engage with him and asked him where he lived. ‘Trincomalee,’ he said. ‘And you’re Tamil?’ ‘Yes.’ I tried to imagine the shit he’s been through.

Next thing his two friends also appeared, running towards us from different parts of the Bay. I held my nerve. These two were much younger than the first and I asked them if he was the leader of the gang, which made them laugh – they said he was. He was probably about 20 and they were 16 or 17. Then I did what they wanted and took their picture. In fact, I was happy to take their picture – I’m a photographer and I actually want to take photos of people, I just hadn’t liked the way the man had demanded it of me and then followed me up and down the beach. It was intimidating. But as soon as I photographed them the barriers came down, the fear was gone and we all relaxed. They didn’t try to steal my camera: they looked at the images on the back and laughed.

I left the three boys kicking sand around on the beach, with no worry that they’d follow me again. 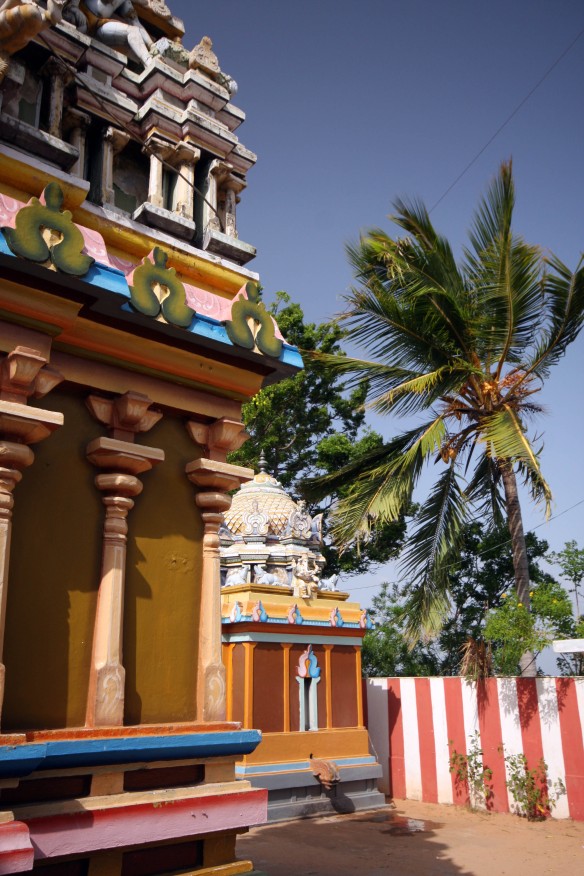 Koneswaram Kovil is a fascinating, brightly painted Hindu Kovil on the point beyond Fort Frederick, next to a 130m high cliff called Swami Rock.

The people I met there were very friendly. One family shared some fruit with me and urged me to eat some of the fresh coconut they had smashed in order to ask for blessings.

There are several frangipani trees growing out from the rock face on which are tied ribbons, sari material and small wooden cradles. These have been left by families who are trying for a baby – their prayers are meant to be answered within a year. 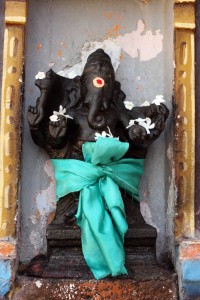 Men must remove their shirt before entering the temple, and everyone must take their shoes off. Ravana, the demon anti-hero of the Indian epic, the Ramayana, is supposed to have had his palace on the radio-mast topped hill near here. According to myth, Ravana cut a deep ravine into the side of the cliff, now called ‘Ravana’s Cut’. Fishing boats can be seen puttering about in the Bay of Bengal far below.

To reach the temple you must pass through Fort Frederick,which was originally built by the Dutch, re-built by the Portugese, then taken over by the British. Trinco has always been highly coveted for its natural deep water harbour. Currently, the Fort is home to the Sri Lankan army. Visitors to the Koneswaram Kovil used to have to undergo a security check, but this is no longer the case and since the searches were abolished a year ago, visitor numbers have greatly increased.

Another quirk of the town are the spotted deer which can be seen roaming around Fort Frederick and in the fruit and vegetable market near the bus station. The herd all grew from a pair kept as pets by an English family in 1800, which means they’re all inbred and presumably a bit crazy!

The diverse mix of cultures here was brought home to me later on as I walked down Mosque Rd. First of all I came to a small Hindu Kovil that had just been opened for the first time in twenty years. The devotees were in the middle of performing an opening ceremony during which they would process around the temple carrying the sacred temple deities in a chariot.

200m further on I passed a mosque, outside which men were sitting on the pavement wearing taqiyah (prayer caps) and talking about the day. Night had fallen but I felt no sense of threat walking alone. Lots of people were around and the atmosphere was relaxed.

One street further over was a large Catholic church, around which were gathered hundreds of people for a festival. A man was delivering a sermon in Sinhalese over a loud speaker and when this had finished there was to be a procession. The way was clearly marked with flowers and lights.

Kumar’s Cream Shop on Post Office Rd has won an excellence award for the past four years running, presented by Trinco. Council. I know this because the certificates are proudly displayed in frames around the shop. The ice cream here is delicious and there are many delights such as banana splits & chocolate milkshakes.

Niva at the NW end of Court Rd, has good, cheap kotthu rotti and fried rice.

Accommodation  I stayed in the Sunflower hotel, on Post Office Rd. I didn’t book in advance I just banged on the door when the bus dropped me off. A room with two beds and bathroom was R1000 (I bargained the man down from R1200). It was clean and perfectly good for a couple of nights. Moreover, there’s a bakery downstairs, the Sunflower Bake House.