Arugam Bay and the surf point

Arugam Bay has been known as a top surfing area for many years now. During the season, from about May to November, it is easily the most popular destination for foreign visitors to the east coast. It’s a working fishing beach and there is quite a lot of rubbish on the sands, compared with the southern beaches, and is perhaps not the best place to come just for a beach holiday: most foreigners I met were there for the surfing. Many locals want to clean up the beach, however – see below – so this may change. For now it’s still very pretty, and quiet, if you want a place to gather your thoughts, and you can visit nearby mangroves on Pottuvil lagoon, or go to Kudimbigala Forest Hermitage to see Buddhist shrines. The Lahugala-Kitulana National Park is 16km inland from Pottuvil and large herds of elephants move there during the dry season (July and August). 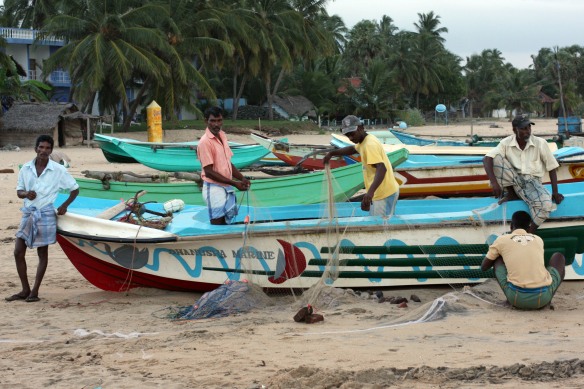 The road from Arugam Bay is now completely open so you can travel south to Okanda and visit Yala East National Park. This park was closed from 1985 to 2002 because of the Civil War and during that time there was a lot of poaching (which, sadly, still goes on) so there is not as much fauna as in the more famous Yala National Park to the west. Nevertheless, the Kumana Bird Sanctuary is heaven for twitchers and since the park does not receive so many visitors, it’s a less frantic experience than in Yala West, with many fewer jeeps racing around full of noisy people carrying cameras with enormous lenses!

There are not many buses going here from Monaragala so make sure you turn up early as they get very hot and crowded, and you don’t want to stand all the way. When I did it the 44 mile journey took over three hours! The bus seemed to stop about every 100m and at one checkpoint everyone was ordered off the bus and searched by the military.

I walked along the beach to the main surf point one afternoon and was lucky enough to meet Krishantha Ariyasena, who is 23 years old and is one of the founders of the Arugam Bay Surf Club. He invited me to visit him next morning at his family’s guest-house, the Freedom Beach Cabana, to tell me more about it.

The guest-house is a laid back, surfy place at the southern end of Arugam Bay, popular with long-stayers and return visitors. An Australian was eating a breakfast of rotti and dahl when I arrived, and loyally claimed it was the best food on the beach. The food is cooked by Krishantha’s sister, and did look tasty.

Krishantha was born in Arugam bay and has lived here all is life. He apologised for the quality of his English but I found him easy to understand, and apologised in turn for my lack of Sinhala. He has been surfing since he was a child and is passionate about the surf club.

‘We formed the Arugam Bay Surf Club before the tsunami but since then it’s got bigger because we never stopped running it. We had a lot of problems after the war and after the tsunami, but now we’re recognised as a club.’

I asked him about his experience during the tsunami but his warm smile immediately disappeared. ‘It was terrible,’ he said. ‘I just want to forget about it.’

Arugam Bay was badly hit by the Boxing Day 2004 tsunami, as was the entire east coast, and although most of the properties here have been rebuilt, the trauma people went through will clearly take much longer to recover from.

‘After the World Qualifying series (WQS) we got much more publicity. The Surfing Federation [of Sri Lanka] was formed. Surfing isn’t recognised as a sport in Sri Lanka, but we are fighting to get it recognised because until that happens it’s impossible for surfers to get any government funding. We need to have more surf clubs. Currently there are clubs in Mirissa, Hikkaduwa, Unawatuna, Matara – Madiha, and here.’

The WQS was staged in Sri Lanka for the first time in June 2010, with trial events for the local surfers sponsored by Indola sports. The International Surfing Association has previously held competitions here but the WQS was a much bigger affair and attracted a lot of media attention. This year, in July 2011, the British Pro Surf Association (BPSA) are holding the Champion of Champions Surf Contest. I asked Krishantha if he would be competing in it and he laughed.

‘I do compete but I’m not a good surfer anyway. Some of my boys are very good. The best surfer in Sri Lanka is Asanka Waduge. When the competition is on lots of people come to Arugam Bay. Massive big teams come to compete. I hope the local community makes a good income from them. It’s very good for attracting tourism. The war finished 2 and a half years ago and since then it’s a lot busier. People think that after the war we got a lot of tourists, but it’s not true. Even during the war people were warned not to come here but it was all bullshit. We never heard bomb blasts, but people stopped coming anyway.’

‘What would you tell people who were thinking about coming here?’

Then he told me about a strange building above the bay called ‘the castle’:

‘It’s thirty years old – very old. It was made by an English guy called Richard. That building was not affected by the tsunami, even though all the concrete buildings were. Everything else was flattened. It’s lucky we know how to swim. After the tsunami a lot of kids were scared to swim so we started running a swimming club. We’re trying to do it again very soon. There’s a guy called Tim Tanton who does a lot of help for the local boys. He runs a charity in Devon called Paddle4Relief. He’s been coming to Sri Lanka for the past ten years and has a lot of experience. Tim brought surf boards for the boys – boards are really expensive and we couldn’t afford it. We lend them free to local kids to learn.’

I checked out Tim Tanton’s website later: http://www.paddle4relief.co.uk/ . He’s doing some great work and is holding a fundraising event on Saunton Sands, Devon, UK, on 21st August 2011. If you are in the area it is well worth supporting him. The Arugam Bay Surf Club really is making a difference to the local community and is just one of the projects he supports in this part of Sri Lanka’s east coast. Much progress has been made but it takes real work to keep the momentum going. Krisantha is well aware of this and said:

‘Please come to Arugam Bay Surf Club. You need to get lessons from a real surfer, not a tuk tuk driver or something, it’s too risky. A two hour lesson, including the hire of a soft top surf board, is about R2500 [currently about UK£14]. All the income goes to the surf club. Fawas is President of the club and I’m Secretary, and we work very hard. A lot of people here just think about themselves and don’t think about the beach. Money sent to Sri Lanka doesn’t always go where it should go and people still don’t really care about things. We’re planning to do a clean up the beach day in June. We want health inspectors to look at the beach. It will bring together local people, the tourist police, the army, the navy and the tourists. We need to get the hoteliers involved, so they collect rubbish every morning from their section of the beach. There need to be a lot more dustbins.’

With this level of dedication and commitment the future of Arugam Bay looks promising, but local businesses really need to think as much about the community as about making money for themselves, and everyone need the tourists to keep coming. Then again, there is such a friendly atmosphere here that for many visitors to Arugam Bay the problem is making up their mind to leave. I shook hands with Krisantha and wished them all luck, sincerely hoping I could return one day. The Australian had finished his breakfast and he picked up his board, saying all this talk was very interesting but it was about time to go surfing.

4 thoughts on “Arugam Bay and the Arugam Bay Surf Club”