The traffic was terrible in Colombo and it took 45 minutes for bus no. 100 to crawl down Galle Rd to TipTop travel in Wellawatta. It was dark when I arrived, dead on 7, and the man in the office directed me to walk down a dark, scary sort of lane to ‘beachside’, where the buses for Colombo were waiting. I quickly found my bus, stowed my bag in the back and sat down in seat number 2, next to a woman called Suda. She told me she was Tamil and worked in the tax department. She lived in Jaffna but had come down to Colombo to do some government exams. When she asked why I was going to Jaffna I told her I was mainly going out of curiosity because it hadn’t been open to tourists long. ‘Besides,’ I said, ‘there’s the Hindu Kovil, the islands, the library and the ice-cream.’ ‘Ice-cream?’ she laughed. ‘Yes,’ I said, ‘I heard Jaffna is famous for its ice-cream.’ This seemed to me a perfectly good enough reason to visit. It was a warm night but after about ten minutes I had to put on the fleece I had brought to use as a pillow. The aircon was cranked up to freezing point and the bus rapidly became fridge-like. Several times, passengers banged on the sealed driver’s cab and asked for some respite from the icy air. To my mind it was completely ridiculous to have air-conditioning switched on at all, considering it was night time and we were on a moving vehicle. I began to regret choosing a ‘luxury’ bus. My seat was right at the front so every headlight came directly at me, and I was the closest person to the video monitor. Nevertheless, I actually enjoyed the film, which was full of Bollywood style singing and dancing. ‘What language is this?’ I asked Suda, not recognising it. ‘Tamil,’ she said. I soon realised that almost all the other passengers were Tamils returning home. At 4am I was still awake, laughing at ‘Mr Bean’, so I knew I was tired. There was a a single checkpoint near Vavuniya where only foreigners had to get out and have their passports and papers checked. I was the only foreigner on the bus, but a couple of Tamils who had emigrated to London joined me from a different bus. They seemed shy about talking to me in English, although their young children spouted fluent cockney. At Murukandy there was a stop for snacks, mainly nuts and tea. Rows of stall holders stood illuminated by yellow lights. The Ankaran Temple was still standing but nobody went to pray at it. The bus driver invited me to drink a cup of hot, sweet tea with him. He’d been driving non-stop since Colombo and told me he was tired, and there were still two hours to go. He would rest for 24 hours then drive back to Colombo the following morning. As the sky began to lighten we crossed the Elephant Pass to Jaffna peninsula and I got my first view of the land. It was flat, sandy and covered in palmyra trees – very different to anywhere else I’d seen in Sri Lanka. I jumped down from the bus on Kandy Rd at about 6am.

On leaving Jaffna I simply took a local bus to Anuradhapura, which took 5 ½ hours and was packed the entire way. This time all the passengers on the bus had to undergo a very lackadaisical bag search in Omanthai, 10km north of Vavuniya. It took a long time to drive through Kilinochchi because we kept stopping every few metres. When the Tigers fled from here they took everything with them, including the slates from the houses, but the government is rebuilding quickly. There are now no houses without roofs to be seen from the road, just lots of small buildings with ‘Red Cross’ written on them.

Living in the ruins, Jaffna

Accommodation Most of the places to stay are east of the centre, either in Chundukuli district or in Nallur district near the Nallur Kandasway Kovil. New places are opening all the time (including Hotel Ooo! on Kandy Rd) while others, such as the GTZ Guesthouse, have closed. I believe the cheapest place to stay is the Kandy Inn on Kandy Rd. A basic room with two beds and a bathroom was R1500 when I enquired. I’d heard that Jaffna was substantially more expensive than the south, but I didn’t find this to be the case. The Kandy Inn is near the Expo Pavilion Hotel (Tel. +94 115736000), which is a new luxury hotel run by Expo Aviation – it looked lovely if you have the cash. The New Bastion Hotel (Tel. 021 2227374) on Kandy Rd seems quite smart on the surface but is already beginning to fall apart, although I stayed here for nearly a week and was happy enough in my small room. The management was friendly and you can order meals to be brought over from the Old Bastion Hotel nearby. Many visitors stay in Sara’s Guest House (Tel. 021 2223627), in a pretty old colonial mansion on Somasutharam Rd, or in Morgan’s Guest House (Tel. 021 2223666), on Temple Rd south of the Kovil. Morgan’s Guest House (also known as ‘Maria’s) has a bar, but I went there on both a Friday and Saturday night and the only people I found there (on my second visit) were two representatives from the German Embassy, who had come to town to open a football field their government had funded.

Eating in Jaffna For excellent Indian food the locals are very keen on the Cozy restaurant, 15 Sirampiyadi Lane. I ate Jaffna fish curry here and it was delicious. The Malayan Cafe north of the market does good, cheap vegetarian curry and rice, as well as snacks such as dosa and vadai. The city is famous for its ice-cream parlours, especially the Lingan Cream House on Kasturiya Rd, near the market, Ideal Cream House opposite the bus station and Rio Icecream near the Nallur Kandaswamy Kovil. Try a ‘special’ which is yummy and comes with two flavours of icecream, plus nuts, fruit and jelly. There’s also a ‘mega special’ if you’re really feeling crazy! The central market sells fruit and vegetables, including Jaffna’s special mangoes, karutha kolumban, renowned for their sweet flavour. 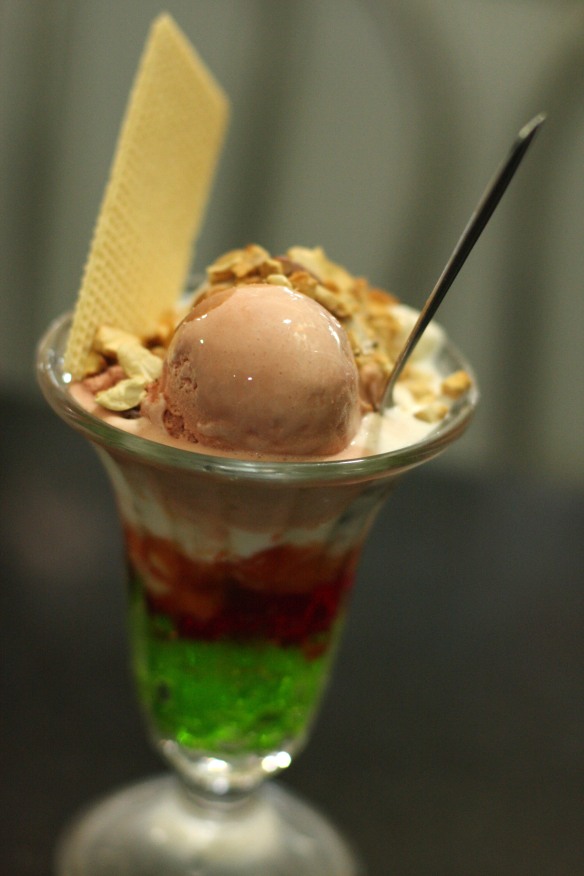