After dawn broke the crowd largely dispersed to wash, change and eat, but they had begun to trickle back when Kuttichathan appeared, and were all fully in attendance for the next theyyam, Pottan Daivam, who is conceptually one of theyyam’s most important and popular deities. A large bonfire had earlier been lit just beside the low wall of the temple and this was now beginning to burn down, although it still emitted a ferocious heat, adding to the heat of the morning. I watched as a heavily built, almost angry looking young man was meticulously prepared for his transformation. Each part of his costume was reverentially applied and he held a small talisman to his chest before wrapping it into the wide strip of material bound around his middle. Over this he put on red britches and a long coconut skirt and when all was finished he looked quite similar to Guligan, except his face was painted bright orange, with black circles around his eyes. Soon after beginning his rituals he put on a large white mask and then proceeded to fling is arms about, ignoring Guligan, who was close by. He picked up a rusty dagger in one of his red-painted hands and a staff in the other and danced around in front of a theyyamshrine while the drummers, who had started up again for Kuttichathan, pounded at their instruments with unceasing energy. It is almost always men from the Malayan caste who drum at the festivals and they are experts in their art. They push one another to drum ever louder and faster, without ever losing the complicated rhythm, continuing for hours, past every point beyond which one would think it physically impossible to continue, and revelling in their extraordinary abilities.

The men from the family who owned the temple gathered humbly near the shrine, waiting for Pottan Daivam to give them rice to throw. 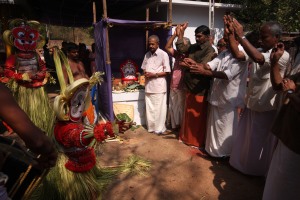 Earlier I’d asked Mr Jawardhanan whether he believed the performer was really possessed by a god and he’d laughed amiably and said ‘maybe for a moment, but the rest of the time it’s just acting.’ Yet now he stood with his head bowed and his hands clasped in prayer, as serious and awe-struck as the rest of the gathered crowd. 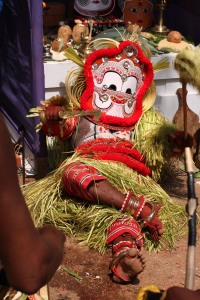 Pottan Daivam literally means the ‘idiot god’, and he does seemingly crazy and unpredictable things, but all this is just to warn people not to be deceived by appearances. His story tells of how the great 9th century teacher Adi Shankacharya, one of the cleverest and most saintly Brahmins of Kerala, is taught a lesson in pride by Lord Shiva. Shiva disguises himself as a poor Dalit labourer and confronts Shankacharya just as he’s crossing a narrow path leading across a paddy field. Dalits were thought to pollute the ‘pure’ Brahmins and could be put to death just for sharing the same road, so Shankacharya tells the low caste man, who has clearly been drinking toddy, to get out of his way or suffer the consequences. Instead the man presents him with a moving argument against the injustices of the caste system, asking ‘If we cut ourselves, do we not both bleed?’ Eventually, the Brahmin realises he is talking to Lord Shiva and prostrates himself on the ground, begging forgiveness. Shiva pardons him, but warns him he’ll never reach Enlightenment until he realises that all men are equally deserving of respect and compassion. The Pottan Daivam theyyam is Shiva in the form of this reckless Dalit, forever reminding people to fight against prejudice and ignorance.

Chicken at the altar

Suddenly an old man, wrapped only in an orange loin cloth, came forward holding a chicken. All the children, particularly the boys, pressed in for a better look as the chicken was laid on the ground within a square made from reeds, with small torches burning at each corner. Pottan Daivan, who was already sitting cross-legged in front of this simple altar, was handed a cleaver and he quickly beheaded the bird, holding the flapping creature still as it waved its severed neck frantically back and forth. Some of the gushing blood was collected into a small metal bowl already filled with a gelatinous red substance, then the god upended this bowl onto the ground and rubbed the blood into his hands.

Having completed this sacrifice, he stood up and danced chaotically over to the bonfire, the crowd surging after him, keeping their distance from the smoking coals. With only a headdress made from coconut leaves for protection, he proceeded to lie down on the coals, stand up and dance around them and then lie down again, all the while accompanied by the deafening drumming. With each round he grew bolder and lay down for longer, crossing one leg over the other as if he was relaxing.

Mr Jawardhanan, who had joined me again, told me the god was complaining of the cold! The crowd watched silently, frowning with concern as the attendants threw down bunches of dry reeds, which immediately burst into flames, and still the god continued to run around and lie down. 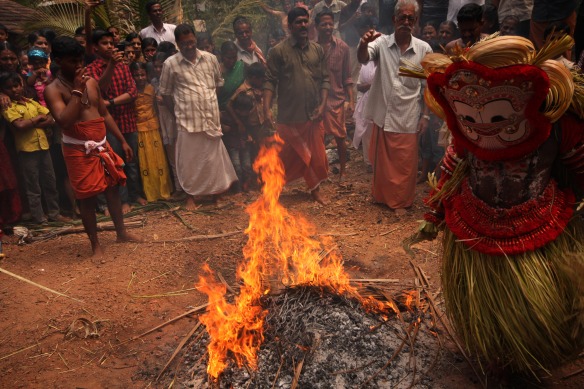 His body was streaked with sweat but he showed no signs of exhaustion or fear, shaking off his attendants and returning again and again to the fire, seemingly oblivious to the heat and smoke, even though his headdress was now charred and thin. This was beyond the acting of a talented performer – the angry young man actually seemed to have taken on the superhuman powers of an other-worldly being. 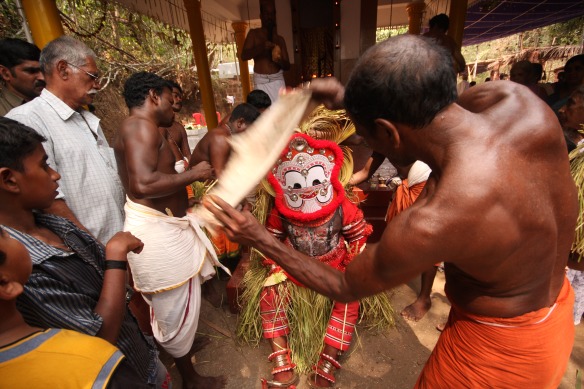 I left the temple at about midday, hot and tired, but elated by what I had seen. Unexpectedly, I had stumbled on another example of the extraordinary diversity of religion in India.

Ironically, as the Dalits become better educated and more empowered, the future of theyyam is put at risk. It takes a long time to learn the many skills required, and most professions will not grant a leave of absence for several months each year. Yet people of all castes still believe in the power of a theyyam to, for example, help them find a job, cure an illness, conceive a child or ensure a good crop. There was a palpable air of expectation, excitement and, most importantly, compassion at both the theyyams I attended and it is obviously central to the lives of the people of Malabar. In the end, it is belief that will keep this tradition alive.

Theyyam only happens in the Malabar region of Northern Kerala, India. The main transport and accommodation hub is the town of Kannur, reachable by rail and bus.